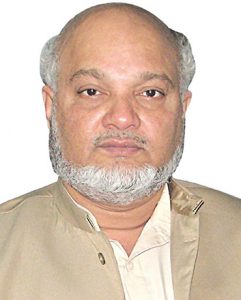 Having matriculated from Central Model School, Lahore, in 1956, he took admission in the Govt. College, Lahore (now a university) from where he passed his B.A. (Honours) in 1960 and M.A. English in 1963. He was also awarded College Roll of Honour. He joined the Govt. College, Lahore in 1964, as lecturer in English, taught inter, degree and M.A. (English) students for thirty-two years. He retired as Professor of English Literature in 2001. He is a poet, humorist, columnist, playwright and broadcaster. He is the author of seven books of humour in Urdu. At present, he is running an academy for C.S.S. students in Model Town, Lahore.