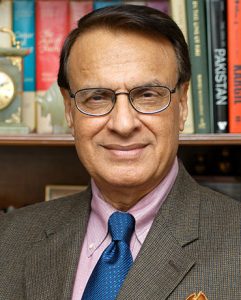 Shamshad Ahmad is a veteran Pakistani diplomat, international relations expert and an author who served as the Foreign Secretary of Pakistan from 1997 to 2000. He also served as the Permanent Representative of Pakistan to the United Nations between 2000 till 2002. Shamshad Ahmad also was the Pakistan’s ambassador to South Korea and Iran.
Education
Shamshad Ahmad did his Masters in Political Science and B.A (Hons) from Government College Lahore before joining Foreign Service of Pakistan in 1965.
Diplomatic career
His diplomatic career includes various posts at the capital of Pakistan, in Islamabad at the Ministry of Foreign Affairs and in Pakistani missions abroad. He served as Ambassador to South Korea (1987–1990) and Iran (1990–1992), as Secretary-General, Economic Cooperation Organization (ECO) (1992–1996), Pakistan’s Foreign Secretary (1997–2000), and as Pakistan’s Ambassador and Permanent Representative to the UN (2000–2002).

As Secretary-General of ECO, a regional cooperation organization headquartered in Tehran, he steered its expansion in 1992 from a trilateral entity (Iran, Pakistan and Turkey) into a 10-member regional organization with the induction of seven new members, namely, Afghanistan, Azerbaijan, Kazakhstan, Kyrgyzstan, Tajikistan, Turkmenistan, and Uzbekistan, giving it a new global dimension and fresh regional framework and common socio-economic development strategy.
Foreign secretary
As Pakistan’s Foreign Secretary, he managed and executed his country’s foreign policy during an extraordinary period of its history that saw the resumption of India-Pakistan peace process, overt nuclearization of first India and then Pakistan, the Kargil War and the October 12, 1999 military coup in Pakistan. Foreign Secretary, Shamshad Ahmad was the one who had announced the last nuclear test (Pakistan’s 6th one compared to India’s 5 nuclear tests) in a defiant, nationally televised speech on 30 May 1998 stating that the world powers had ignored the long-simmering conflict between India and Pakistan until these nuclear explosions by both countries only because it raised the possibility of a nuclear war back into the global agenda and focus. Shamshad Ahmad told reporters that it was not Pakistan’s purpose to enter into an arms race with India and that Pakistan was forced to develop its nuclear capability only in self-defense and only to restore the strategic balance with India after their nuclear tests earlier.
In the aftermath of India-Pakistan nuclear tests in May 1998, he played a key role in promoting mutual “restraint and responsibility” between India and Pakistan, and on the occasion of the Lahore Summit, signed a memorandum of understanding with his Indian counterpart on February 21, 1999, laying down a framework of mutual “nuclear risk reduction” and other confidence-building measures aimed at preventing the risk of nuclear conflict and unauthorized or accidental use of nuclear weapons.

Shamshad Ahmad also held eight rounds of talks with his US counterpart Strobe Talbott from May 1998 to February 1999 on issues of peace and security in South Asia, including nuclear and strategic stability stabilization measures.

Pakistan ambassador to UN
During his tenure as Ambassador to the United Nations, he co-chaired UN General Assembly’s Working Group on Conflict Resolution and Sustainable Development in Africa, and also served as Senior Consultant to the UN on economic and social matters (2002–2003) with particular focus on sustainable development and poverty alleviation.